I have been a very passive blogger this summer, reading and not writing. I realize it will be a few more days before I can put up a proper post, so I thought I’d at least check in and say something.

First of all, I’ve been mostly savoring summer. It’s not proper summer weather here (too cold). But I am still enjoying every minute of it after the horrible winter we just had. Funny, around here, any mention of winter sends shivers up our spines.

I haven’t lost any weight to speak of. I’ll post about that eventually.

I’m still running, but enjoying it much less the last week or so. I’m also not doing any other fitness. A few things I’ve tried haven’t worked out for me, so I’m happy to at least keep up with the running for now. The last week I’ve been dealing with fatigue, shin splints and sciatic pain. All of which I’m vigorously attacking to fix, since it’s contributing much to my lack of motivation.

Today we are off on a road trip to St. Louis for yet more summer fun. I’ve never been except for a Thanksgiving at a great aunt’s when I was about 5. Our main reason for going is to see the Brewers play at Busch Stadium. That will be so much fun! The home page of Busch Stadium starts out with this: “On April 10, 2006, the Cardinals opened their new 46,000 seat retro-style downtown ballpark with a 6-4 win over the Milwaukee Brewers.” I hope we don’t see a repeat of that loss, but I’m prepared for it! The Cardinals are a great team. {Rob, I’ll have to report on how we’re treated with wearing our opponent team apparel.}

I hope everyone is enjoying summer as much as I have been. I also hope to get back to regular posting soon. But it might be after State Fair, Renaissance Faire, River Rhythms, St. Martin’s Street Fair, maybe another baseball game….

I ran my second 5k this past Saturday. And in a few weeks I will run another! Bam!

This one was another one in my own town. Two in one year for this small town, crazy. It was the inaugural Balloonfest “Morning Launch” 5k. For this first time, there were many glitches. But, oh well.

Through my running neighbor, I met two new women from the area that are close to my age and are new at running. Now this is cool! First, that my neighbor is inspiring all of us to run 🙂 and second, that there are other women my age new to running in the area 🙂

The morning registration included some music with a DJ. Pretty nice way to start out the morning and get everyone in a good mood. I spied a donut stand nearby too, but that was the last thing I wanted with my nervous stomach. Shortly before start time we had some guided warm ups, also a much appreciated thing.

This was an interesting course, which we only found out on the morning of. It turns out many people were a little surprised by it. And I’m pretty sure that I might not of signed up had I known it. We started out on grass. Then went up a short steep hill onto a narrow trail in a pine stand. This rooty, rocky trail continued until it emptied out on grass just shy of a mile. At this point we were diverted onto a road and faced yet another hill. And it was hill after hill. They weren’t big hills, after all it’s only 5k, but for me who can’t do hills it seemed like an eternity of hills. Did I mention there were people with strollers? On the grass. And on the hills. Funny how there seems to be so many uphills and so few downhills. I tried the mantra “I love hills!” with some success. (Thank you to all of you who suggested using mantras.) The road portion looped through a subdivision and got to a point where we were heading back along the route we came out on. Back through the pines and grass to the same place we started from.

It amazes me that even though I was exhausted- the same old huffing and puffing and can’t catch my breath- that I could find this incredible energy the last stretch across the grass to sprint through the finish. There were only 210 of us and I came in at 146. I managed to improve my time from two weeks ago and got a PR of 43:03. I have no idea how that happened. It sure felt like I was going slow with all the hills. Maybe they mis-measured the course (wouldn’t surprise me…) But I’m happy with the time. There were no age-group awards, only top 3 under-18 and top 3 18+. Darn, I was hoping to pull the age-card again!

It was a great course (I loved the trail through the pine trees), but tough for a beginner. And tough for children and tough for strollers. I don’t know if they will change it next year due to our complaining. I guess it depends on where they’re going with this 5k. Do they want a family friendly (aka strollers and kids running) course or something more competitive? Either way, better communication would be good, so we all know what we’re signing up for.

I was disappointed that the balloons were not launched while we ran (as advertised). They had already taken off well before 7 am when we arrived. So I wasn’t able to get pictures as I had hoped. We didn’t even attend the two day festival this year, so I had to get some pictures from others. For the festival, they launch the balloons in the morning and evening and do a nighttime glow. Saturday after dinner we could see them in the distance in the sky as we left the restaurant, so we drove close enough to get some photos. The one below is my own. The balloons by then were pretty far off and I had to use the full zoom on the iPhone, but even then most were too far. This one turned out great. 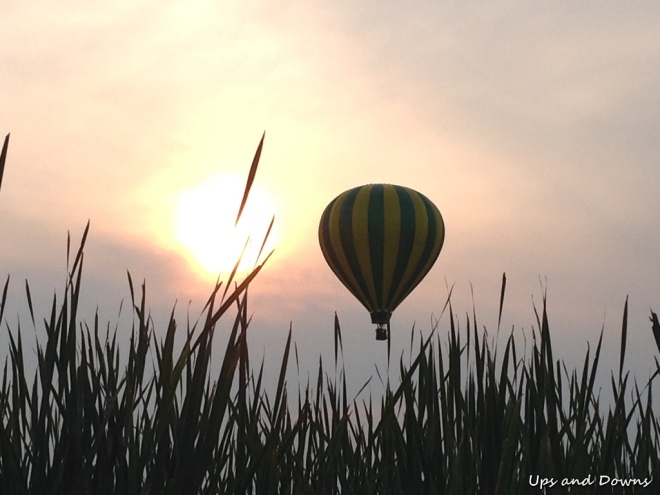 I ran in an official timed 5k! It was amazing! {Sorry for the excitement 🙂 } I was so nervous and waited to sign up until just a few days before, but at least didn’t wait until day of when I could easily have just not. I had a pretty bad run (slow) two days before this, so I was worried how I would do. This small 5k is promoted as a fast 5k because it’s flat (yay, no hills). This brings a few who are looking for a new PR. I was impressed with the group. These were real athletes in my small little town. And here I was doing the same thing they were doing. Waiting for the start, I spotted a man with an Ironman tattoo on his calf. Holy Cow! There were also plenty of first-timers just completing a local couch-to-5k program and also lots of children racing. There were lots of families and groups that knew each other. I was with my neighbor, her son (BQ) and her sister visiting from out of town. I got to experience first-hand the camaraderie of runners that I’ve heard so much about from you running bloggers.

I lined up at the very back of the pack. I had my Jeff Galloway app all queued up. The gun went off and I was thinking okay, I guess it’s “time to run” (Jeff Galloway voice). He encouraged me the whole way, telling me when it was “time to walk” and “time to run”. I was encouraged early on when I was able to pass some people and I thought that at least I wouldn’t be last over the finish line. A large part of the race I was with an older man who’s running style resembled shuffling to me. It was kind of comic that I would catch and pass him on my run and he would catch and pass me on my walk. Back and forth we went until at about mile 2 I was able to get ahead and stay ahead of him. The last mile was tough. The sun was hot and my stomach was upset. I really tried to think that in a few minutes it would be over, so now was not the time to slow down, no matter how bad I felt.

I did finish and it felt so good. I couldn’t have been happier. When they started handing out medals, I realized they were giving to 5th place for age groups. Oh, my, goodness!! I looked at the results sheet and sure enough, there were only four of us women in my age group. What?!? That meant that no matter what my time, I was going to get a medal. Okay, maybe I was proud of myself for finishing and even proud my time was better than I was expecting. But it sure was fun to get a medal. All I could think was how lucky I was to be old (haha).

One thing I found amazing about this experience was the very young and very old racing. I could not believe it. The youngest age group was 9 & under, with the best times of 25:52 (female) and 24:01 (male). Wow. Of the 17 kids under 10, only two had a time slower (slightly) than mine. The youngest of the whole race was a boy who was 5 with a time of 41:31. I hope these kids stick with the healthy lifestyle and really hope they aren’t being pushed by adults. I remember when my kids were in sports how hard it was for me to differentiate between encouraging and pushing. I guess the best way to encourage is to be an example and when it comes to any kind of sports/fitness I was definitely not an example for my kids. Well, better late than never.

This upcoming Saturday I will be doing the local Balloon Fest Morning Launch 5k. It’s the first year for this 5k, so it should be interesting. I’m already getting those knots in my stomach and it’s only Monday. I hope this gets a little easier with experience.

Full disclosure: my medal may have been gotten by default of only four of us in my age group, but the other three here earned their medals by their times!